How can I install a new dictionary on OS X for use with the “Word of the Day” screensaver?

The reason is trivial: I am a fan of the "Word of the Day" screen saver and I would like to add dictionaries for languages other than English and Japanese (these are the two that I can select now in screen saver options).

It is a list of tab-separated entries. On the right you have the word, and on the left, what looks like an ID. But what's it an ID for, and how would you be able to find it for another word not already on the list?

As you might expect, the ID refers to an entry in Apple's default dictionary, the "New Oxford American Dictionary". (That's what "NOAD" stands for in the word-list path above.)

How to find the IDs for other words?

A fellow named Joseph Gentle, in a series of blog posts, shows how to get at the data underlying Apple's dictionaries. In his "Apple dictionaries, part 2" post, he points to code that unpacks the relevant binary file (stored in /Library/Dictionaries) into XML. Using the dedict.c and strip.c files found here, and following Gentle's example, I used the following bash commands to get at the NOAD's XML (these commands are run from the directory where you downloaded the dedict.c and strip.c files):

When I head-ed the first few lines of the dict.xml file, I saw something promising, with entries that looked like this:

Notice that id param... it's an identifier that looks exactly like the one in the screensaver word list!

I wrote the following Ruby script to parse the XML, and then, using my own word list, create a new screensaver file that maps my own words to their IDs in the dictionary:

When I replaced the original screensaver file with this new one, it worked. You can now have a "Word of the Day" screensaver that gives definitions for the words you choose.

If you have 10.8, you can enable French, German, Simplified Chinese, and Spanish dictionaries from the preferences of Dictionary.app: 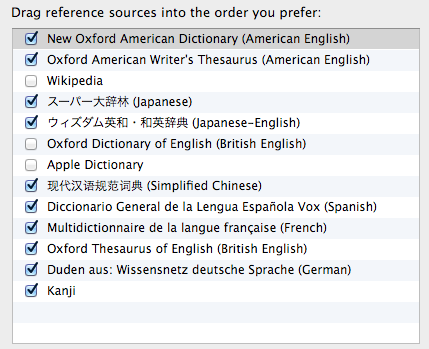 They don't seem to be shown as choices for the Word of the Day screensaver though:

I also tried restarting after enabling the dictionaries.

In case anyone is still interested in this in 2018 and come across this..

I just updated to OS X Mojave, and found a Word of the Day.saver file at /System/Library/Screen Savers/. In this package, go to Contents/Resources/WordLists/, and you can find the 5 .plist files used in the Mojave WotD (they added three Mandarin/Cantonese Chinese dictionaries). There you can use jsomers's method above.

Also it's been a while since Apple added the System Integrity Protection to the OS X, so you will have to disable it before writing to the .plist file.

I'm quite happy that Apple haven't given up on the good old WotD, and updated it a little in Mojave. Hope they can provide even more dictionary choices in the future.

Want to improve this post? Provide detailed answers to this question, including citations and an explanation of why your answer is correct. Answers without enough detail may be edited or deleted.

This should solve your problem: http://www.makeuseof.com/tag/easily-expanding-apple-dictionary-xe2x80x93-mac-only/