Running an AS droplet from Terminal

I have an Applescript Droplet application that I need to run from terminal. I can use osascript or even just open to open the AS App, but that will run its on run handler, not the on open droplet handler I need to be run. I tried passing the "dropped" file in (osascript /Path/To/App.app /Path/To/Droppings.txt), but it still runs the on run handler. Is there a way to do this? And if not with bash, is it possible from another AppleScript? Thanks.

You can use another AppleScript that tells Finder to open files with the droplet application.

For example save this script as /Applications/droplet.app in AppleScript Editor:

Alternatively, create the droplet application with Automator instead of AppleScript Editor: 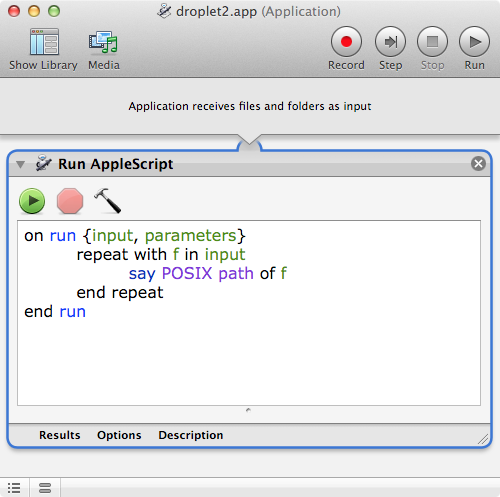 Then run open -a droplet2 /bin/test.

The run handler is also used for files dropped on the application. A handler named open does not have any special meaning.

One drawback of using Automator applications is that there is a relatively long delay before they are run.