How to set up reverse tethering over USB?

Is there a way for the phone to access the Internet through the USB connection to the computer? If so, how do I set it up?

I recently discovered SimpleRT which works very well with Linux (and apparently OSX as well). Simply enable USB Debugging on your device (no root required), install the APK linked from that page on your device and connect it to your PC via USB, and then run the binary on your PC.

It will set up the connection as a VPN tunnel (tun0 by default) and your device should prompt you to (a) allow SimpleRT to create/oversee the VPN connection as well as (b) whether to run it when the device is configured as a particular USB accessory (which is what the binary does).

The project does not include a pre-built binary, so I've uploaded one I built for Ubuntu.

Below is a manual method that should work on Linux or Windows: http://blog.mathieu.carbou.me/post/60454997009/reverse-usb-tethering-with-android-2-2

For Linux: Nothing to do

On Nexus One: Connect USB cable and activate USB Tethering. You should see on linux or windows a new network interface.

On Linux Computer, setup a bridge:

On windows, Bridge the 2 network interfaces

Setup usb0 interface of your phone. You have to options:

You should now be able to connect to Internet on your phone using your computerxe2x80x99s Internet connection.

Try to do a ping www.google.com to be sure !

To shut down the reverse-tethering, first unbridge interfaces on your computer:

Then on your phone, uncheck the USB Tethering option !

You can also use Windows to create a WiFi network (using Connectify) and connect your device to that: http://www.nexusoneforum.net/forum/nexus-one-faq-how-tos/3133-reverse-tether-getting-internet-your-phone.html

There are some more possibilities -- but all of them I know of require a rooted device.

First, there's an App named Reverse Tether available for free on the Play Store (it's a limited trial, which restricts the time you can be connected -- but at least you can test this way whether your device is fully supported; the full version is about USD 5). According to an article at AndroidAuthority, setup should be as easy as 1-2-3: Plug in the USB cable, start the app, let it auto-configure (manual configuration is available as well) -- and there you go. You can also let it ask you to connect when it finds an USB-connection.

I know, this is not USB -- but for completeness (and giving alternatives) I thought I might add these as well:

fiddling with the system and patching around

Several manual methods are available as well (and described e.g. at XDA) -- but they are mostly technically complex, and expecting you to patch system files; not for the every-day-user, but rather for the tech-freak.

However, another nice method should just involve 3 lines in the terminal, and is described in a post here, to connect to an ad-hoc Wifi network. Basically, it should go like this:

Another quite easy method is also described here, and involves editing the wpa_supplicant.conf file once (manually adding your ad-hoc Wifi network).

Do I need to say, really? Use a Wifi router. There are even some small "Travel routers" around for less than USD 50. And then connect your phone like you use to connect it to other Wifi networks...

Hey! there is an app for that

I am a bit confused how to use it, please inform if you get it working perfectly.

I know this is an even later answer, but it is worth mentioning it.

No app installation needed!* Which is not even possible if you do not have some other internet connection.

There is a project called gnirehtet.

That's it! For more information, read the readme file of gnirehtet on their website.

*=Behind the scenes it will install an apk file on to your device via the USB connection.

I've found a good tool for reverse tethering on xda-developers forum. It's called Android Reverse Tethering. It works with Windows and requires a rooted phone.
It works fine on my HTC Desire HD running MIUI v4.

Note: Works only in a rooted Android phone.

3.1. Without the network manager, you will have to do it manually:

Now, as explained here at the end of Step1 you have to modify iptables with sudo iptables -t nat -A POSTROUTING -j MASQUERADE. But... prefer allow network manager to do it if possible.

Now internet would be working in the Android phone.

To check, at adb shell or android terminal, try the command ping www.google.com.

It works for me.

I know this is a late answer, but as all existing answers suggest that USB reverse tethering is only possible if either your device is rooted or has system support for reverse tethering, I though it'd be worth pointing out there's one more option:

I was looking for a reverse tethering solution that would work on my unrooted devices and with a MacBook, but I just could not find anything. Eventually, I started to develop my own solution. The result is an app that works on devices running Android 4.0 or higher on client side, and all major desktop OSs on the host side. 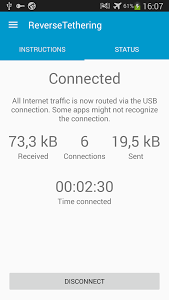 The app is available on Google Play: ReverseTethering NoRoot